One Ring to Rule Them All

I have this interesting relationship with opera.  Not having gone through a masters program in voice like many of my opera singing friends, I sometimes feel like an opera ignoramus.  To a large extent, what I’ve learned about opera has come from performing in them – I haven’t studied them academically to nearly the degree that most opera singers, or even some opera fans, have.  I studied opera a fair amount in pursuit of my BA in Music (I studied Vocal Performance and Music Theory after all), but the genre on the whole just didn’t really resonate with me until I actually started performing in fully staged productions.

Take Wagner. (Stay with me here. Many people tune out at the mention of Wagnerian opera. I was one of you until three weeks ago. Imagine this as a “take my wife, please” joke if it helps.)

Anyway, so take Wagner, please (drum hit).  During college when we studied Wagner in one of the survey of music courses, his music didn’t really do much for me.  Yes, from a theory perpective the leitmotifs and through-composed style were interesting, but I didn’t find it… enjoyable.  It just felt like it was missing something, and the Wagnerian voices didn’t do much for me either.  Everything just felt “too much” and I didn’t care for it.

Fast forward 11 years and a dozen operas later.  Friend and former opera boyfriend, a regular with the Seattle Opera chorus, has a spare ticket for the dress rehearsal of Die Walküre.

1) On-stage romantic partner; this relationship frequently includes fake canoodling and singing loudly in each other’s faces while acting like this is a normal human interaction.

2) A man offering an evening’s platonic companionship coupled with the use of free opera comp tickets.

Opera boyfriend has a spare ticket because for some reason it’s hard to find a date who wants to go to a 4-hour opera. Crazy, I know.  However I, being of sound mind and wallet, recognized this as a good opportunity to finally see what all the fuss is about.  True, Die Walküre is 4 hours long, but it also has one of the single most famous musical themes of all time:

(I have it on good authority that a spontaneous rendition of “Kill da wabbit” erupted among opera choristers in the men’s room that night.)

I figured if nothing else, I could go to help my friend keep his eyes open and take in the experience of having seen Wagner the way everybody says it should be done. For those of you less familiar with opera, Wagner’s Ring Cycle is an epic telling of Norse legends that takes FOUR OPERAS to tell – about 16 hours.  So it’s pretty much the Marathon of the opera world. Die Walküre is the second of the four operas. The world of the Ring has a myriad of characters –  gods, mortals, dwarves, mermaids – it can be a little confusing until you figure out who is who.  Seattle Opera had this handy sidewalk field guide: 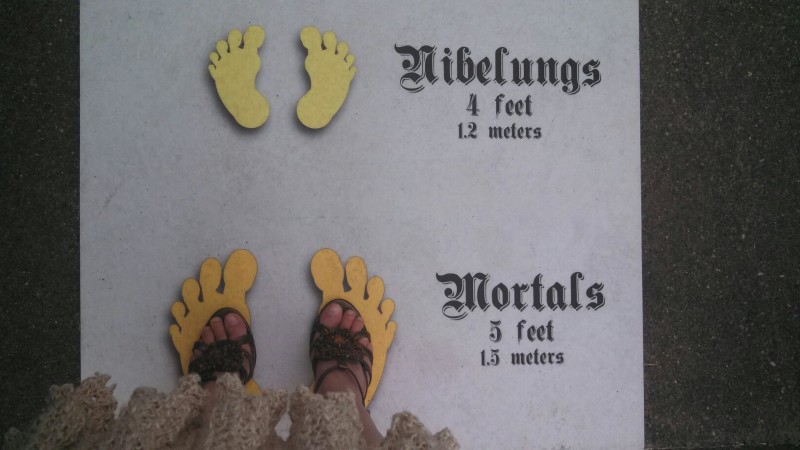 Evidently I am just shy of Mortal height, but with the feet of a Nibelung.

I walked in a skeptic, not expecting to like it and just going to take in the experience.  I walked out a convert, completely floored by what I’d just witnessed.

The music that seemed so overwrought (yet simultaneously boring) when I heard it as a college student was lively, shimmering, and perfect in the context of the world that was created on stage.  I finally understood why everybody says that Wagner needs to be done all out or not at all.  And the most amazing thing is, it didn’t even feel long.  When I allowed myself to just be in the moment and take it all in, I thoroughly enjoyed it.

I loved the exquisite music, and the captivating sets, but most of all I loved the characters.  With the stereotypical helmeted “fat lady” in mind, I always pictured Brünnhilde as a rather stationary, static character. But Alwyn Mellor’s Brünnhilde was agile and beautiful, in both voice and appearance.  She also was a total bad-ass.  (She’s still a warrior maiden after all, so she’s got to look strong enough that you wouldn’t want to face her in a fight.)  In this Tolkien-esque, male-dominated fantasy world, it was refreshing to have a great female character at the center of it all. 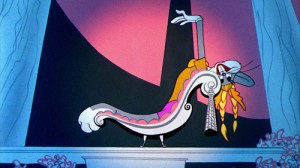 Runner up for favorite Brünnhilde goes to Bugs Bunny.

I ended up loving it so much that Opera Boyfriend and another singer friend were nice enough to give me tickets to the 3rd and 4th operas in the cycle, Siegfried (giant dragon!) and Götterdämmerung (aka, “Götterdämmitslong”).  Those two operas are 4.5 and 5 hours long, respectively. I reorganized my life for the week around finishing the cycle. It really is a fully immersive experience –  going to the whole cycle consumes your life both in and out of the opera house.

I woke up on several days that week wondering what day it was, sure that I’d misplaced my magic helmet and asking if I was a mermaid. (No, I don’t actually have a magic helmet.  Yes, I am a mermaid.)

So here I am, unexpectedly finding myself a Ring fan, and wanting to be a Rheinmaiden when I grow up.  Not necessarily a Wagnerian one, but an actual one.  It just seems like the coolest job in the universe.

Seriously. How is this not the awesomest job ever?
(photo by Seattle Opera)

Just look at them, frolicking and guarding the Rheingold and taunting us with their coolness.  Sigh. I will just take my Nibelung feet and go work on my swimming.