My life has been a peculiar combination of stressful and sedentary the past couple of months.  A lot of traveling, which means a lot of sitting interspersed with short flurries of activity.  The “altitude adjustment” of getting up into the mountains feeds my body and soul in a way that few other things can.  I finally “unplugged” and took the opportunity take my legs and newly-healthy lungs out for a spin.  It felt incredibly good to get the air moving through my lungs, stretch the legs and the muscles, and get out on a real hike in a beautiful place.

We headed out to Hurricane Hill – a famous hike at Hurricane Ridge, the northern side of the Olympic peninsula and the Olympic mountain range. We started the day by dropping off some crab pots on the way over to the peninsula (because nothing is better after a day of hiking than fresh-from-the-water dungeness crab).  But getting the boat in the water and dropping the pots is a pretty quick job if you’ve got the right boat.  😉

There were crowds aplenty up at the visitor center, and knowing the trail we were planning on visiting was a popular one I was a little bit concerned that there would be a lot of people up there.  (There’s nothing quite like planning on “getting away from it all” and instead finding yourself in a sea of humanity.) There were people, yes, but that didn’t stop these fellas from coming out and enjoying the sun: 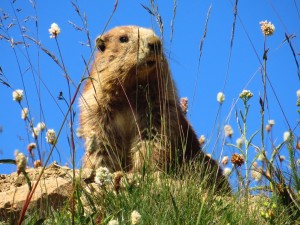 Marmots!  They used to be common up here, but in recent years have seen their numbers decline due to predation by non-native coyotes.  It was a treat to see a couple! We also had the delightful sight of a deer running down the mountain and bedding down in a patch of lingering snow.

No better place to relax on a hot day.

It was about this point where we came across to a big, rolling meadow of wildflowers.  Cue musical interlude, “The hills are alive… with the sound of music!”  Nothing quite like serenading birds, marmots, and the occasional bemused hiker at 6,000 ft.

Then up at the summit, we had really rare treat in seeing a whole family of mountain goats!  We were cautious because they had a baby with them and the nanny goats can get very protective.  So we stood our distance and let them come only as close as they felt inclined… 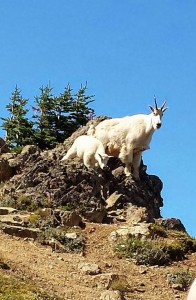 …turns out they were pretty inclined!

Being summer, they are leaving pieces of their winter coat all over the place.  My dad even spotted some goat wool on the branches of a tree, and he collected it and gave it to me.  So now I know what fuzzy, wild mountain goat wool feels like.  It’s incredibly soft! If only I had enough to knit something with it. 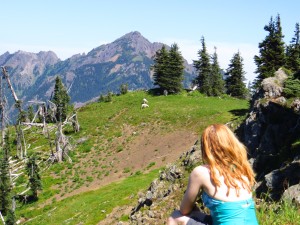 Watching the goats from the ridge

Looking out at the Strait of Juan de Fuca, Vancouver Island, Mt. Baker, and then the other direction toward Mount Olympus and the heart of the Olympic range… it’s nothing less than awe-inspiring.  The mountains inspire me like few other things do.  I want to say more about that, but now is not the time.  So I’ll just close with one of my favorite images from the day. 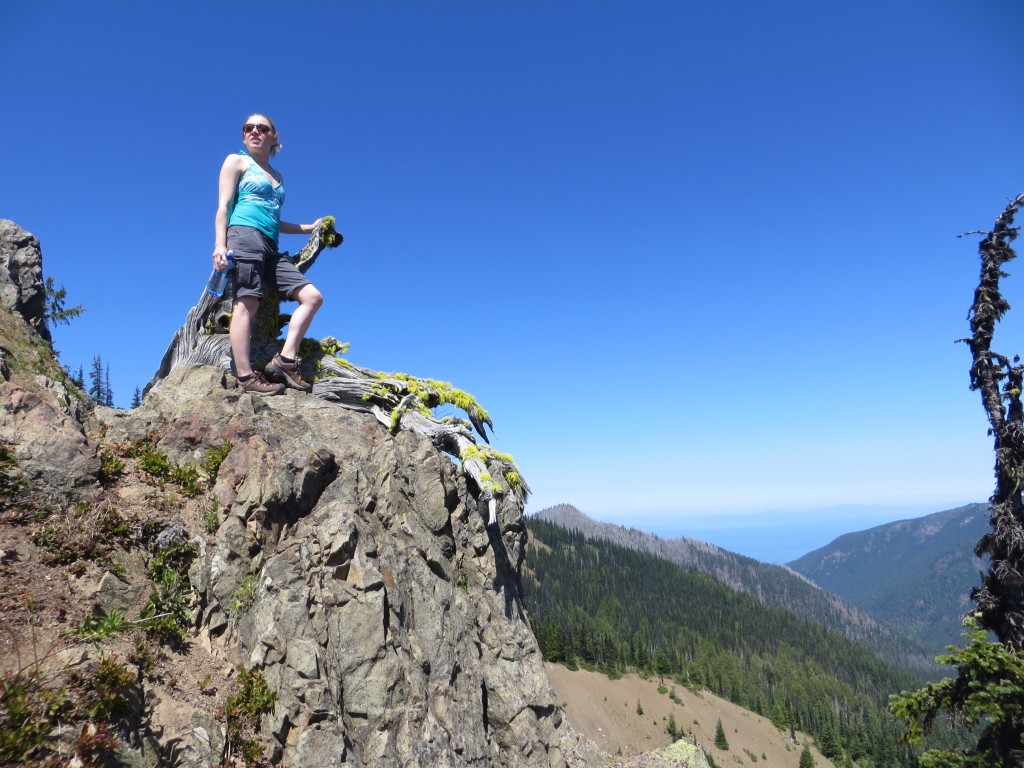 Top of the world

Thanks to Dave & Janet Robertson (dad and mom) for sharing the pictures from the day!