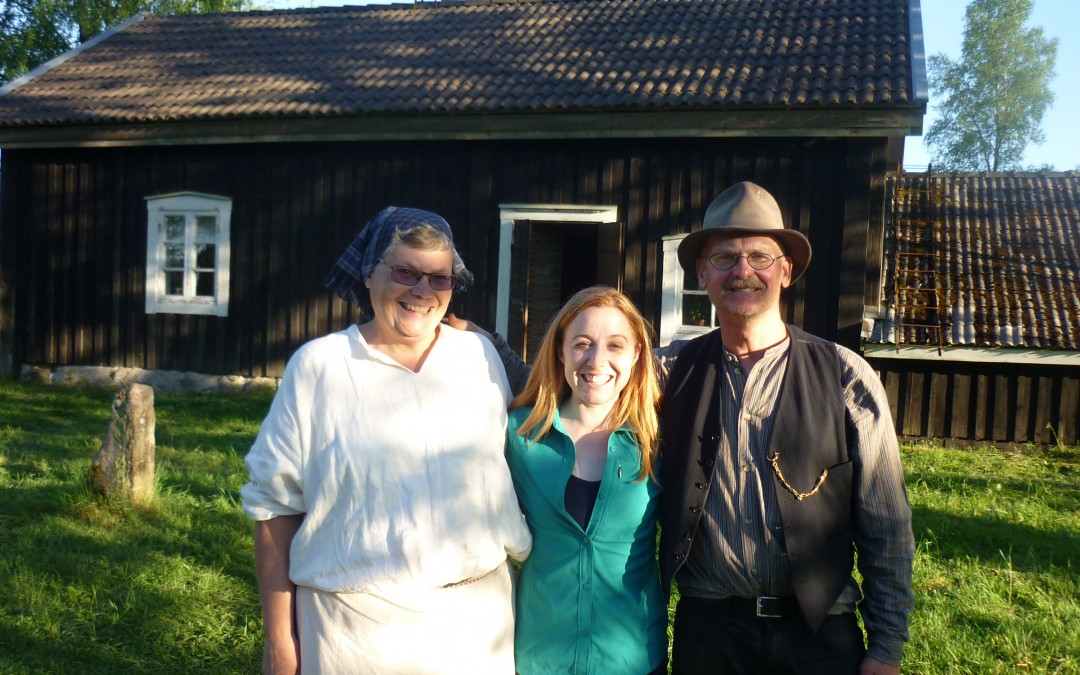 (After the great response I got from my little “behind the scenes” essay from episode 1, several people asked whether I would be willing to do the same for other episodes too.  So here are some of my favorite memories from our time in Småland. Don’t proceed if you haven’t seen the episode – spoilers ahead!)

When we first got to the farm we dove right into our chores immediately.  Half of us started making the porridge and half of us went to milk the cow.  The porridge-making group consisted of me (head cook), Leslie (sous chef & woodstove consultant), Nick & George (firewood splitting & fire building team).  Getting the porridge from ingredients to table really was a long and arduous process!  The guys got the fire going while Leslie and I read through the recipes and figured out which one would work best with the ingredients we had available (two types of flour, salt, butter, and lingonberry juice).  Lisbeth was a godsend, she helped us figure out which recipe would work.  What we decided to do was make the “base” recipe of just flour, salt, and water, and then people could add their own lingon or butter at the table. According to Anders, the everyday way to do it would have been to serve the lingonberries alongside, and only on special occasions would butter have been added on the top of the porridge in the serving dish as a luxurious treat.  Though if we were being really traditional about it the head of the house would have taken his portion first, and the majority of the butter with it!

Starting the fire was the easy part – waiting for the water to get hot enough to boil felt like an eternity!  I think there were something like 4L of water in there and it took about an hour to boil.  We gradually, a cup at a time, added flour to the water.  The first few were easy while the consistency was thin, but by the last few cups it was a thick, sticky ball not unlike a batch of bread dough.  Now imagine constantly stirring a sticky mass like that for 45 minutes to an hour in a hot pot so that it doesn’t scorch!  I learned that my ancestors were not only mentally tough, they were physically strong to boot.

The dining room had an embroidered wall hanging that read, ‘Bed och arbeta,’ which means “Pray and work.”  It captured what must have been the driving ethos of the time and a good reminder for all of us to work hard and be thankful for what we have. After all that work, I was happy to serve the food to my starving friends and not a little proud that it appeared to actually be edible.  It was a little salty but tasted essentially like bread dough.  I knew everyone was incredibly hungry and hoped they would be able to satisfy themselves with the fruits of our labor.  I know they weren’t particularly excited about eating it, but it’s what was there and everybody was a good sport about at least tasting it, even if they didn’t all clear their plates.  I did see a couple of people go back for seconds, which goes to show that when you are hungry enough you will eat pretty much anything.

Imagine my relief when I saw Anders Lundin walk up with pizza for dinner.

Anders told us that it is a popular thing in Sweden to combine two good things together, so why not put something good like a hamburger, or whatever other things you like, on a pizza?  To which I responded, “It’s like any given Friday night at my house!”  I explained that we call it “fridge pizza” when we take whatever we can find in the fridge that looks good and toss it on a pizza.  Our most unexpectedly delicious pizza to date was accidental lavender chicken.  He said, “That’s the Swede in you!” 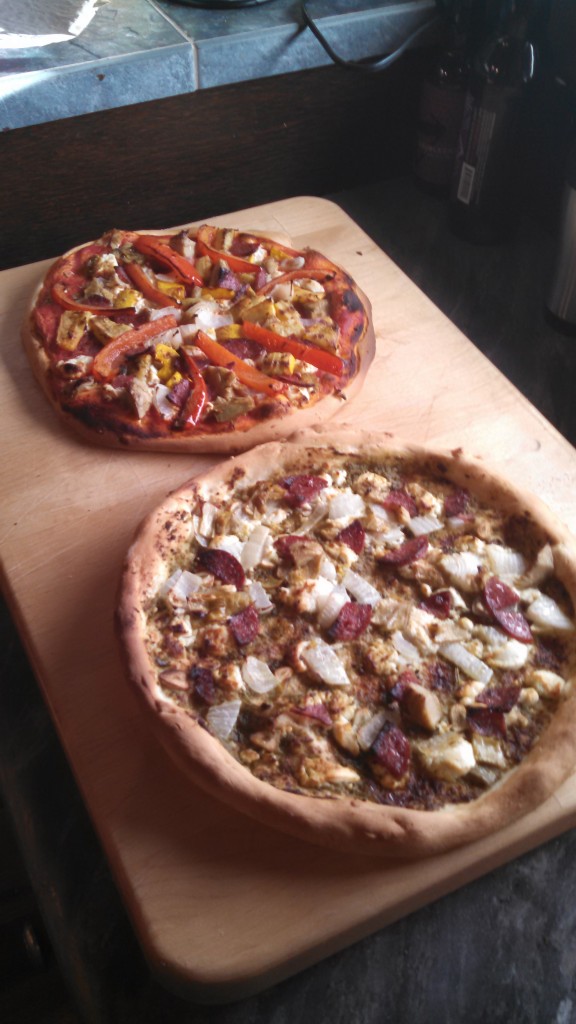 One morning on the farm I got up early and went for a walk through the woods.  George is an early riser and he’d already been out that way and told me about a place on the road where there was an amazing echo.  I walked in that direction, singing to myself most of the while.  It was obvious when I got to the place that George was talking about.  I didn’t even sing a song, just a little melody that came to my mind and my heart, building upon it as I played with the sound that reverberated through the trees.  There were probably quite a few birds that wondered what the heck that big neighbor bird was doing and why it was singing so darn many high notes.  But I felt so at home and so physically and emotionally free, it was an exquisitely peaceful and inspiring moment for me.  I walked back “home” and felt a little bit homesick, missing my husband and my woods and my family.

I curled up on my bed and Courtney came over to see if I was okay.  She started humming a song (that I would later come to recognize as one of her favorites by a group called The Civil Wars).  And then we started singing together.  Amazing Grace was first.  Then anything we could think of that we both knew.  A lot of gospel and church songs.  And yes, “Down to the River to Pray” became one of our favorites.  Of all the time on the farm, I think I am most thankful for the moments that I had with Courtney when we sang together, talked together, or ran away to try and find a hole in the trees where we could see the sunset.

There was also an incredible tree out front by the well that just ached for me to climb it.  So I did.  Repeatedly.  And much to the amusement of some of the crew. As the team took me aside for one of our individual interviews, Lukas, who had been with me on that incredibly emotional day when I learned my family story, said, “You seem…. light.”  And it was true.  There was a lightness of spirit I felt at the farm.  It was beautiful and the rhythm of the natural world felt like an ever-present part of me. 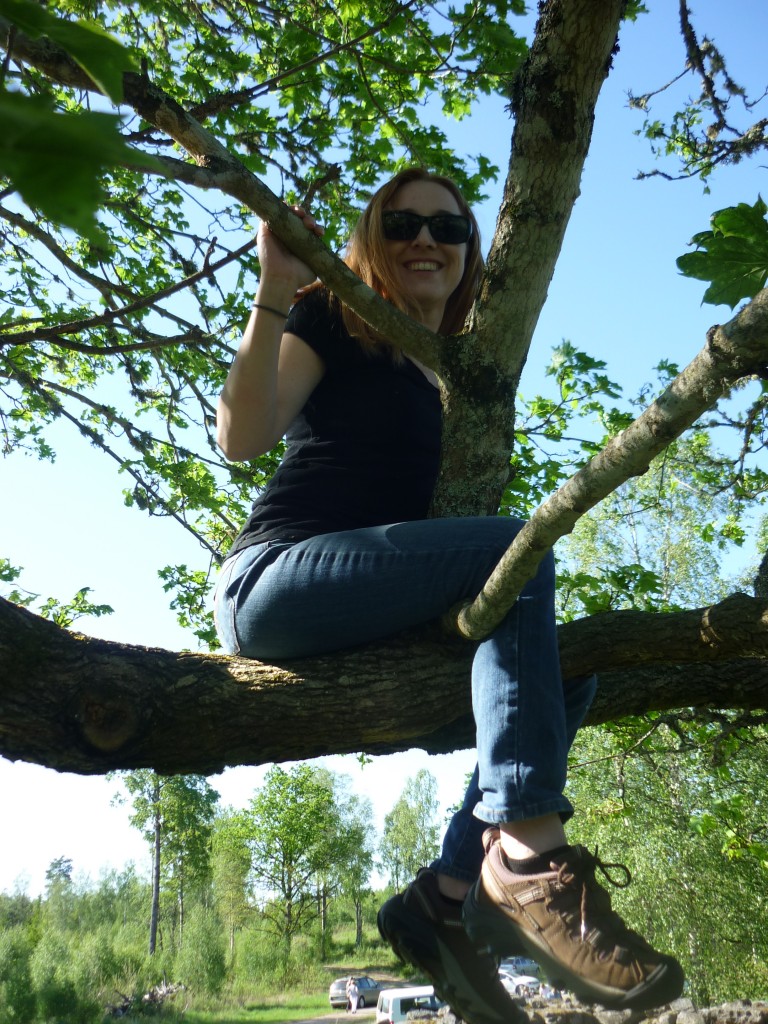 “Thinking Outside the Box”

That last morning I was a trembling ball of nerves before the individual competition.  It wasn’t fear of losing as much as it was just pure adrenaline and the mystery of not knowing what we would be asked to do.  It felt like stage fright, but when I’m performing I can always remind myself that I’ve rehearsed and there’s the intellectual reassurance that I know I’m ready.   But in this case, I didn’t know what would be asked of me so there was no way to prepare, and my brain was floundering trying to figure out how to deal with that.  As soon as we found out what the challenge was, the anxiety melted away.  I knew what had to be done, I had a plan, all I had to do was execute it.

Thinking outside the box seemed like literally the best way to approach it so I could have room to manipulate the pieces and spin them around without being confined to a small space.  The issue was just clearing a work area, so I carefully stacked the pieces, sorting them by color around the edge of the table.  I examined the edges of the pieces and there were also gridlines on the top so it was pretty obvious to me that they’d all been cut from a single piece of foam.  Given that, I tried using the gridlines as a guide and the pieces all fell into place pretty quickly.  I had no clue that I was first to finish, I was just focused on my own table.  After a big sigh of relief I looked to my right and saw that everyone else was still working, and my jaw dropped. 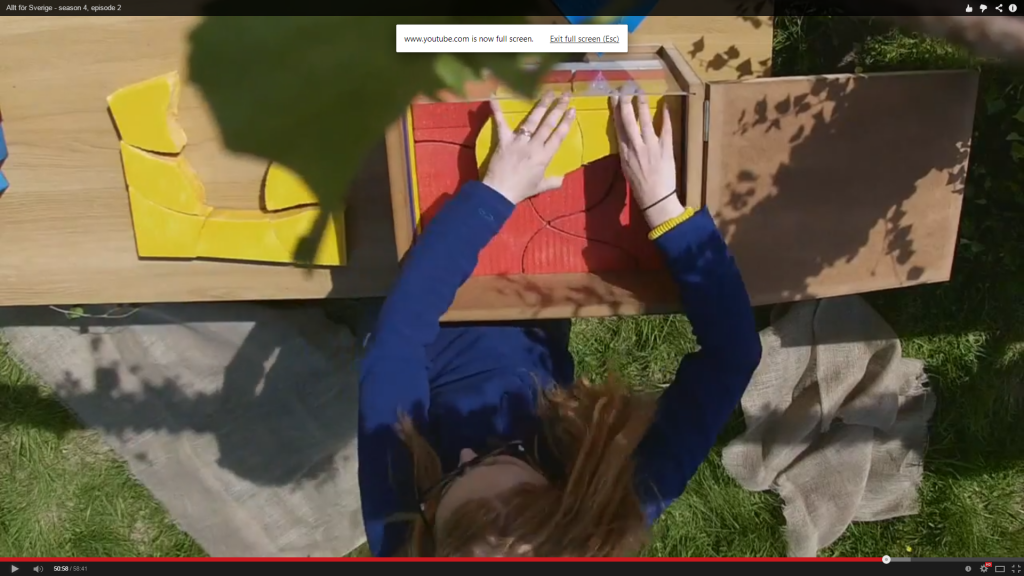 Outside the box is where I live.

My heart ached when it came down to Leslie and Amanda.  I was simultaneously thrilled for Leslie that she persevered and figured her way through the puzzle and devastated for Amanda that she had to leave, so soon after her amazing day.  Amanda seemed cool as a cucumber all morning, but that’s just how she is. Amanda is smart, fun, beautiful, and has the adventurous spirit to get through a disappointment like this.  She has the ability to step out and see the world and come back to Sweden on her own if she wants to.  Miss you, Amanda – you’re welcome in my little corner of the world anytime!

But Leslie had so much doubt about her abilities beforehand, she kept saying, “I’m the one going home.”  I was glad for Leslie simply because after the incredible resilience she’d shown in her own life, this was her first chance to get out of her comfort zone at home and really spread her wings in the world.  And having come through that challenge, she also had the right to say that she earned her own way by her own wits.  Leslie worries that she comes across as stupid sometimes, but she is smarter than she lets on.  Every day of her life, she’ll surprise you. 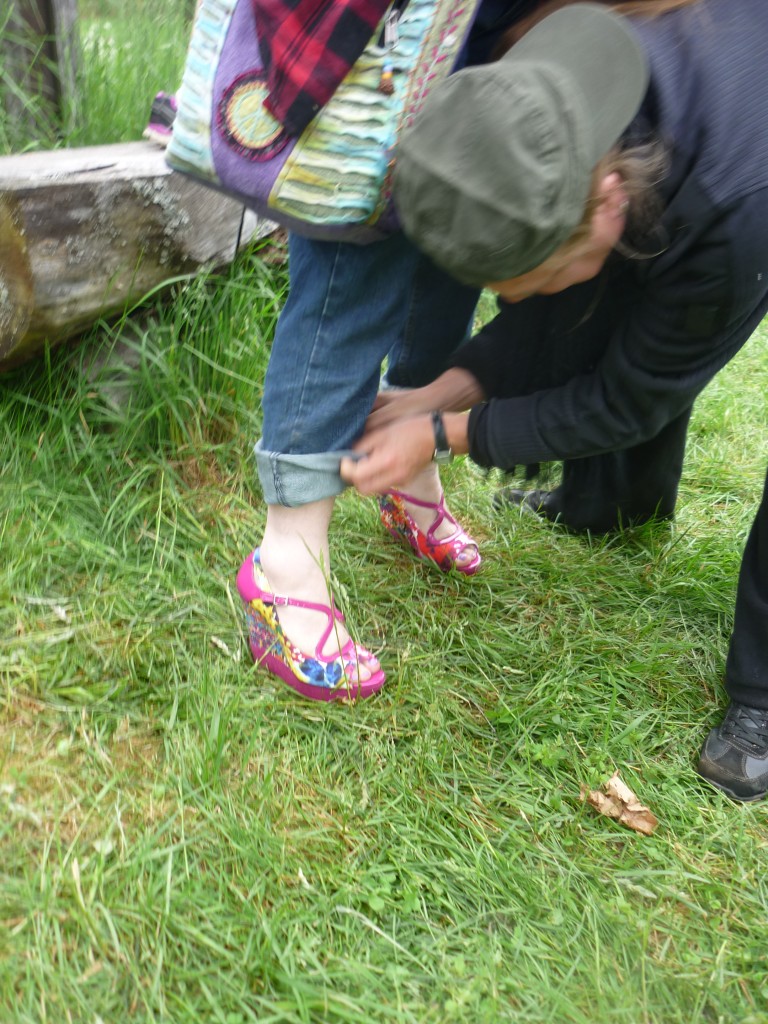 And sometimes, she will surprise you by putting on Courtney’s flowered platform heels.