As I’m trying to write up my thoughts for this episode they aren’t coming as freely as they did for the last two.  I think that’s because this time, the things that ended up in the episode are largely what I remember most.  That’s a change from the first two episodes where I had a lot of experiences off-camera that stuck with me.  In this case, it’s like I got a different angle on experiences I already vividly remember.  But there are a couple of things that weren’t shown that perhaps people would find interesting.

As we walked through gamla Gävle (old town Gävle), Courtney noticed the fire escapes that were on all the old houses.  There was even one that had a little iron cutout of a person climbing it that was pretty cute.  I commented that it was funny how she kept mentioning them, like she was preparing for a fire or something!  That was before we knew the tragic history of Gävle and how Courtney’s family story is so closely tied to it. We would soon learn that Gävle was once as big and critical a port as Stockholm, but its old town area is so small because it’s all that is left that hasn’t burned.  Most of the city appears newer and more modern than most cities in Sweden, because so much of it has been rebuilt over time.  In hindsight maybe Courtney’s family passed down an awareness of their surroundings, if not a genetically transferred paranoia about fire.

The goat challenge was actually a lot of fun, even though it was physically exhausting.  We had a good strategy and communicated very well, which made the team work like a well-oiled machine.  We agreed that I would direct where to place the hoses and that anyone could request to switch places with someone else (to a bucket with less water) when they got tired.  Plus, when we were strategizing ahead of time it occurred to me that when they were telling us what we had to do for the challenge, they made an offhand remark that water would come out of the pump joints so we shouldn’t put our hands there.  Which got me thinking – these things are going to leak!  If we could find a way to lose as little water as possible while we pump, we would have an advantage.  So as everyone down the line started pumping I watched for leakage so we could adjust our technique if needed.  That’s why you see us moving in much the same way, we figured out that the pumps lost less water if you didn’t force them back down, which let us conserve our energy for the upward pull.  Didn’t seem like much at the time, but I think that and switching around when we got tired was what made the difference.  We were floored when we found out we finished 5 minutes ahead of the other team!

I’m glad that George had a win under his belt when he went on his treasure day.  I think it took the pressure off a bit and he was able to relax a little.  He was already nervous to go and learn the truth about his father’s background, so thankfully he didn’t have to have the looming threat of elimination on top of that.  I was really happy for George.  He wouldn’t say specifically what he found out, but there was a definite change in his demeanor.  I think he came back a different person than he was when he left. 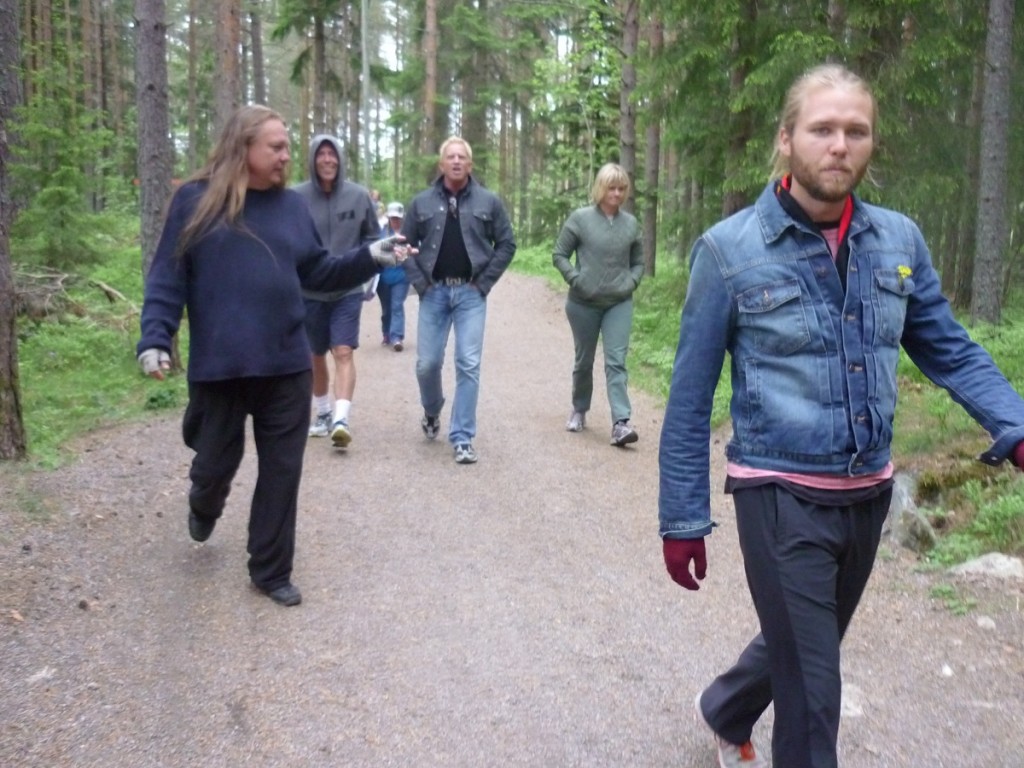 On the way to our picnic in the woods outside Gävle

That little picnic was really fun.  I’m glad they showed Nate chugging the herring juice!  But aw man, I really wish they’d shown me taking a big ol’ bite out of a whole smoked herring (it was good!).  Plus Jennette shotgunning a can of beer was a sight to behold.

I thought it was really interesting when we were up on the top of the hill and Anders told us that an epic battle had taken place there, with nary a marker or plaque to be seen.  In the US, that site would have been made a national monument or at the very least have a placard installed that reads “On this spot in 1713…”  It made me wonder why that is.  The Swedes are surrounded by a historical record that goes back much further than we have in America.  I suppose that when you have runestones dating back a thousand years scattered all over the country it makes the events in more recent history less interesting.

But another thing I think is a factor is that the Swedes never had to gain independence as a country.  Maybe there’s something to be said for having to work so hard for what you want, it makes you want to specifically remember why you fought so hard and so long.  And maybe that’s also one reason for why Americans are so reluctant to embrace the kind of society that Sweden has developed – with socialized healthcare, etc.  That independent “pull yourself up by your bootstraps” spirit in America is engrained in us from our time as children. We grew up seeing reminders of our history fighting for that independence everywhere we went, to national parks and monuments or even driving down the road noticing a “historical landmark” sign, not to mention learning about our forefathers in school and celebrating Independence Day by blowing up as much stuff as spectacularly as we can.

I was Courtney’s roommate at the hostel where we stayed in Gävle.  She was gone all day learning about her family history, and I was eager to hear all about it but had to go to bed, so I left a note on her pillow that said, “I hope you had an amazing special day!”  I didn’t expect to get to talk to her about it until the morning.  But I woke up when she came in and asked her how it went, expecting her to bubble over with excitement about what she’d learned, like I did when I found out my family story.  Instead of that joyous smile that I love to see on her face, there was a look of stunned silence.  She said her story was so tragic that she didn’t even know what to make of it yet – but if she could have processed it in that moment, she would have cried.

It was such a stark contrast to my experience that at first I didn’t know what to do or say other than to just hug her.  The next morning she let me read her letter, and she told me that she was hoping for some silver lining to the story, some sort of happy-ending redemption. But it was evident to me that Courtney herself is the happy ending.  To have your family so catastrophically impacted that it took three or four generations for them to get their feet under them again, Courtney is the living, breathing “happy ending” that she was looking for.  She is the living proof that they her family not only survived it, but because they stuck together their children’s children now are joyfully thriving.

So you can imagine how happy I am that Courtney got to share her talent, her voice, and her writing with us and with all of you.  It was a genuine honor that she asked me to help her get ready for her gig and also to sing with her there.  And I’ve also had the privilege to hear some of the music she’s been writing since she got home, inspired by her adventure and her family’s story.  She took her family’s tragedy and made it into something beautiful.  I can’t wait for the day she is able to share it with all of you.

Since my team won the competition we were sitting in what I lovingly dubbed “sequestersville” while the others were undergoing the individual competition.  We had no idea what was going on, only that it seemed to be taking a very, very long time.  We ended up having to come up with ways to amuse ourselves – I got my knitting out at one point but couldn’t concentrate on it.  So instead I got out my ipod and we had an impromptu dance party right there in the hallway.  To me, dancing is the physical embodiment of joy.  Nothing like a little bit of dancing to make the time go a little bit more quickly, plus it was something to take my mind off of what was going on the other room.    (And another reason I was disappointed that Amanda – queen of the dance party – had to leave so soon!) 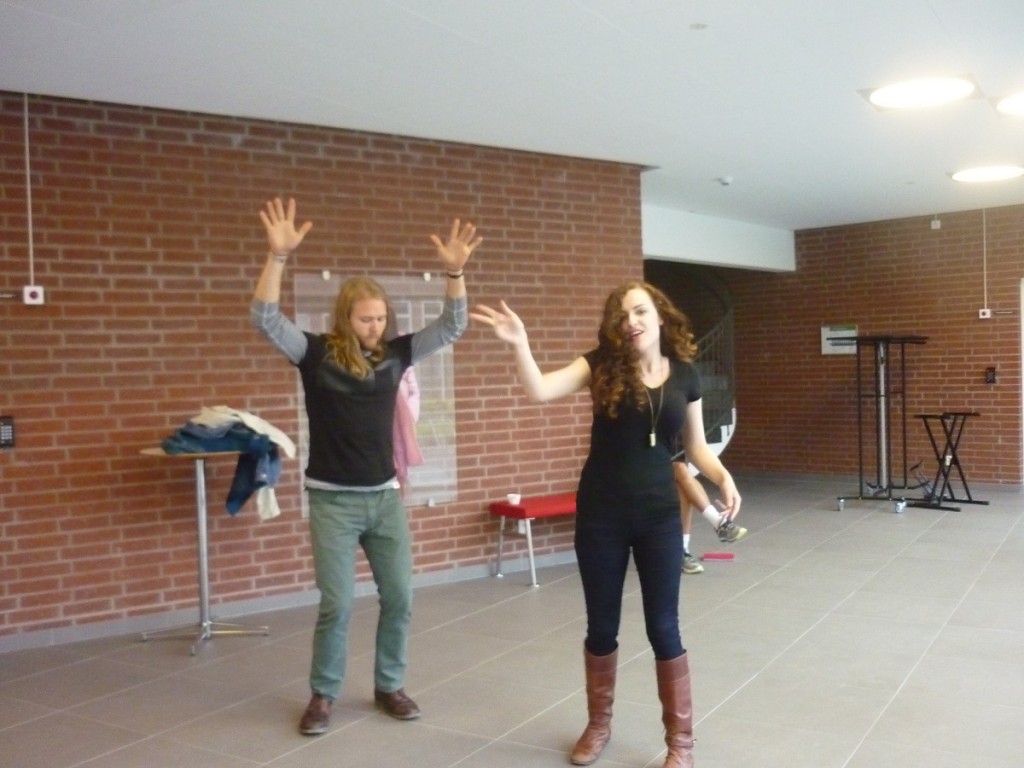 Troy was a basketcase when he came down the stairs.  He was crying so hard at first we thought it was him going home.  But when we realized he was crying for Leslie’s sake and I saw the empathy he had for her, my heart really went out to him and my respect for him ratcheted up a few notches.  Leslie was so gracious in her departure.  She was genuinely thankful for every moment she had in Sweden.  Our little band of adventurers felt a gaping hole when she left.  Missed you then, and still miss you now, dear Leslie Ann!