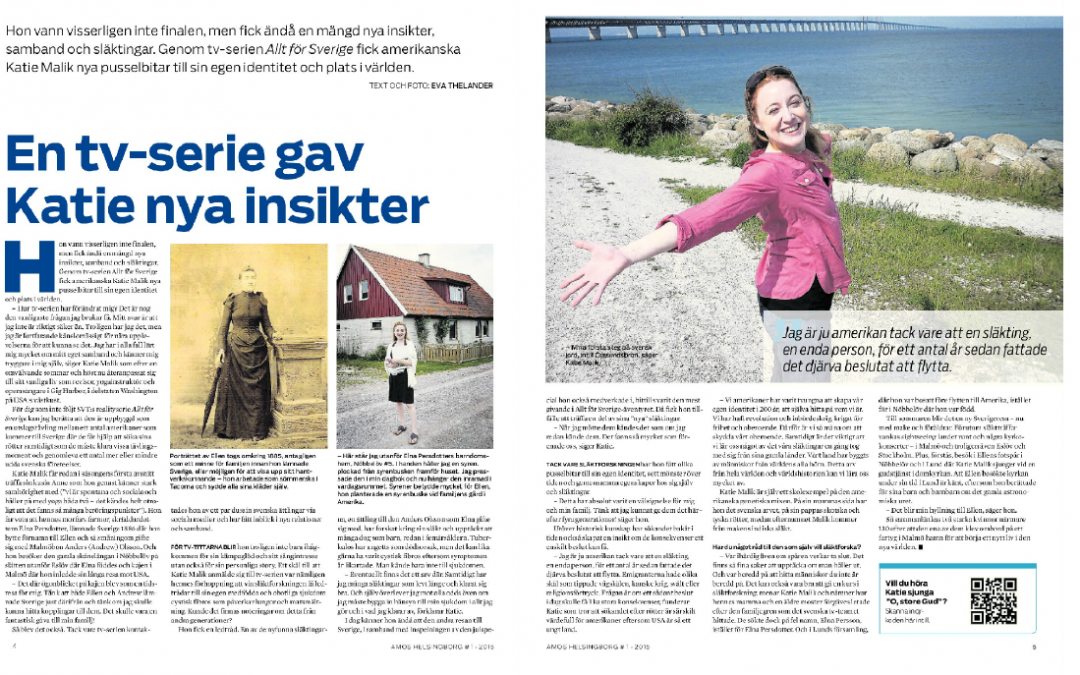 She was not the final winner, but still received many new insights, connections and relatives. Through the television series All for Sweden, American Katie Malik fit together new puzzle pieces about her own identity and place in the world.

– “How has the TV show has changed me? It’s probably the most common question I get. My answer is that I’m not really sure, yet. But I have learned a lot about my own relationship and feel confident in myself,” says Katie Malik who after a tumultuous summer and autumn now again adapted herself to her ordinary life as an accountant, yoga instructor and opera singer in Gig Harbor, Washington state on the US west coast.

For those who have not followed SVT’s reality series All for Sweden, it is designed as a knockout competition between a number of Americans who come to Sweden where they get help to find their roots while they must succeed in competitions and experience a number of more or less odd Swedish phenomena.

Katie Malik already in the season’s first episode met her cousin Anne whom she immediately felt a strong connection with. “We are spontaneous and social and doing yoga both – it felt absolutely amazing that we had so much in common.” Katie learned that her grandfather’s grandmother, Elna Persdotter, left Sweden in 1886 where she changed the first name to Ellen and eventually married Malmö is Anders (Andrew) Olsson.  And she also visited the old Skåne farm in Nöbbelöv on the plain outside Eslöv where Elna was born, and the quay in Malmö where she began her long journey to the United States.

– “That moment on the quay became symbolic of the journey for me. Keep in mind that both Ellen and Andrew left Sweden right from there and what it would mean if I could find connections to them. It would be a great gift to my family!”

And so it became. Thanks to the TV series she was contacted by a couple dozen Swedish descendants through social media and has gained insight into new relationships and correlations.

For TV viewers, she is probably not only remembered for her fighting spirit and her vocal abilities but also for her personal story. One reason that Katie Malik signed up for the TV series was in fact her hope that the genealogy would give a few clues to her own genetic and incurable disease, cystic fibrosis, that affects the lungs and digestive system. Could there be evidence of this from other generations?

She got a clue. One of the newfound relatives, a descendant of the Anders Olsson who Elna married, has researched the family’s genealogy and discovered that far back on the family tree, many people died as children, seldom reaching five years old. Tuberculosis has been identified as the cause of death, but it might as well have been cystic fibrosis because the symptoms are similar. In those days the disease was not yet known.

– “Possibly there is a legacy there. At the same time, I have many relatives who lived long and have done well. And here I am surviving against all odds, that I can still do everything I do even taking my illness into account,” says Katie Malik.

Today she feels, however, that the second trip to Sweden, in connection with the shooting of the julspecial she also starred in, has so far been the most rewarding in all of her Sweden adventures. That was when she got the opportunity to meet some of their “new” relatives.

– “When I met them, I felt like I already knew them. There was so much that united us,” says Katie Malik.

Thanks to the genealogy she has received various puzzle pieces into her own identity, family patterns over time and common characteristics of herself and her relatives.

– “This has definitely been a blessing for me and my family. Keep in mind what I have been able to give them now- after four generations!” she says.

In addition to historical knowledge, the search backwards in time also created an awareness of the consequences an individual decision can cause.

– “I am an American thanks to a relatives, a single person, who years ago took the bold decision to move to a new country. The emigrants had different reasons that tipped the balance, perhaps war, famine or religious oppression.” The question is whether such a decision today would have equal consequences, considering Katie who believes that searching for roots is especially valuable for Americans because the US is such a young country.

– “We Americans have had to create our own identity in 200 years, we’ve had to find out for ourselves who we are. We have had a revolution and civil war, fought for freedom and independence. Therefore, we are so committed to protecting our independence. At the same time, it is important that we learn something of what our relatives once took with them from their old countries. Our country has been built by people from all over the world. This heritage means that American history is world history, and we can learn a lot from it.”

Katie Malik is herself a textbook example of the American genetic mix. On her mother’s side is her Swedish heritage, on her father’s Scottish and German roots, while the name Malik comes from her husband’s Indian family.

Do you have any advice for someone who wants to do family history?

– “Be persistent even if the tracks seem to end. There are great things to discover if you persevere. And expect to find people you are not prepared for. It may also be helpful to take a course in genealogy,” says Katie Malik and mentions how her mother and an elderly aunt in vain looked for the family branch that the Swedish television team found. They sought, ultimately, the wrong name, Ellen Piarson instead of Ellen Persdotter. And they had looked in Lund township, where she resided before moving to America, instead of in Nöbbelöv where she was born.

This summer there will be a new Sweden tour – this time with her husband and parents. In addition to family reunions there will be sightseeing around the country. Plus, of course, a visit to Ellen’s footsteps in Nöbbelöv and in Lund, where Katie Malik will sing at a church service in the Cathedral. Katie knows Ellen was here at the time because of the story of the old astronomical clock penned by her grandfather.

– “It will be my tribute to Ellen,” says Katie Malik.

And so two strong women are brought together, close to 130 years after one of them stepped on board a ship in the port of Malmö to start a new life on another continent.