I love the rain — family and friends from my youth will attest that I always have.  The sound of rain on the roof is comforting; the freshness of the air is cleansing. To me it is a reminder of home and books and slow-cooked food and cozy fires… so there is nothing more welcoming than a good rainstorm.  It feeds my soul in a way nothing else quite does.

So it’s fitting that on the day of my concert at S:t Johannes Kyrka in Malmö, and our family reunion, there was a torrential downpour.

I had just come back from the morning’s rehearsal and was getting ready for the concert when it started drizzling. The only dress I’d brought to perform in was sleeveless, the shoes I brought were open-toed pumps, and the curls in my frizz-prone hair were nicely calm.  As we prepared to leave I threw on my raincoat, my husband grabbed the umbrella, and we hoped for the best.

About halfway to the church, the skies opened up and I found myself walking through one of the largest downpours I’ve ever seen.  We huddled together sharing the umbrella, water splashing up at us with every step. I usually don’t mind getting wet and am something of a puddle-jumper, but when making oneself presentable for one’s international solo debut, that’s a different story.  😉  I think I was giggling like a crazy person at the sheer surrealness of the moment.

When we arrived, we were pretty well soaked and there were already people gathering at the entrance.  My husband went to join the family and I went back to the vestry with Christian Schultze (the organist).  Christian explained that every Thursday at noon, the bells would ring for all the people who passed away in the parish that week.  The concert would then begin immediately after the bells fell silent.

I then had a few minutes to myself. Ind tried to make myself presentable and attempted to de-frizz my hair, then just sat silently, focusing and collecting my thoughts as I always do before a performance.  I think through the program and focus on being present in the moment. 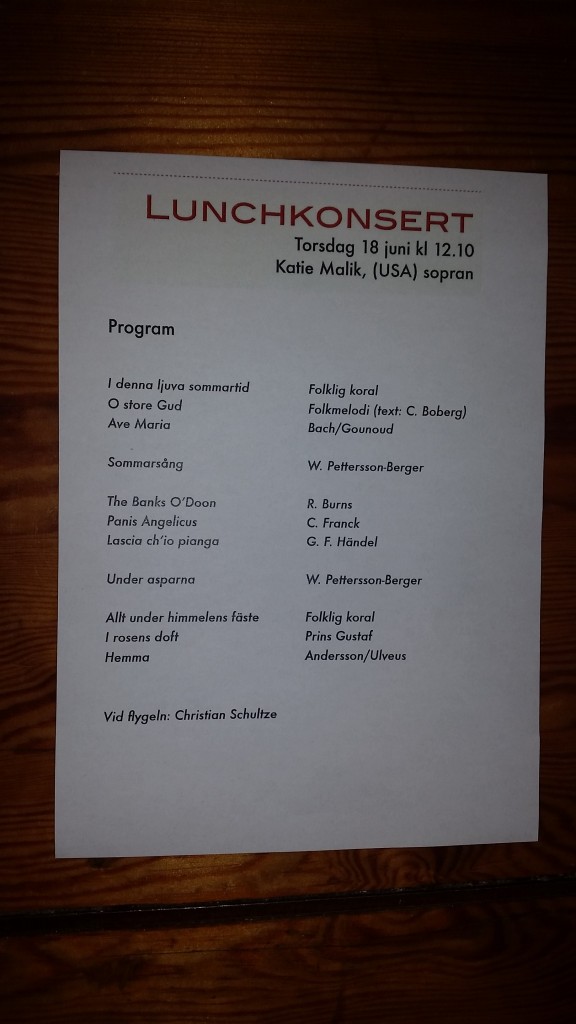 Plenty to think about.

I had no idea what to expect – how many people would show up to a church at lunchtime on a Thursday, the day before a major holiday, to hear me sing.  I knew I’d have some family there that I would be meeting for the first time. And I was also performing three songs in Swedish for the first time, hoping that people would understand me. Given all this, I asked for clarity.  That I would communicate truth, and the simple hope that those present today would share in something beautiful.

Then Christian returned, and handed me an envelope that had been mailed to the church, to my attention.  Surprised, I opened it and found a note from a fan requesting my autograph. Just as I was asking for a connection with the people out there, a stranger had already reached out who felt a connection with me.  And I laughed again at how surreal it all was. “How did I get here?!”

Christian and I walked out into the church, and the bells began to ring. And ring. And ring.  When the sound finally died, my voice was the first thing to break the silence:

At that second line, “Go out, my soul, and rejoice,” there was a palpable sigh throughout the room.  Those are the moments that I love, when I know the audience feels like they’re in good hands. Two phrases in and we were already in that moment, together.

One thing about being in the moment though, is that I don’t really remember it all clearly afterward since I’m not focused on locking it into my long-term memory.  The concert after that is all pretty much a blur, up until the moment when I asked my relative Anne to come up and join me for a special surprise.

The final piece of the formal program was Hemma from the musical Kristina från Duvemåla.  A few weeks beforehand, I asked Anne if she would like to sing it with me, as there are a few lines that are normally sung by a children’s chorus.  She agreed, and it was wonderful to have her up there with me, a representative of the family we’d been separated from for four generations, welcoming us back home. Together we sang:

As the final echoes died away the room erupted in applause, and I was met by a downpour of love. I don’t even know who everybody was who came up and showered me with flowers and hugs. A relative placed a midsommar flower crown on my head and my arms were completely full as I offered an encore, “My dear Marquis” from the operetta Die Fledermaus.  It was actually perfect, singing this aria about a woman masquerading as a lady of noble birth, while strolling about with my arms full of flowers!

Afterward I was greeted by many Swedish relatives and fans of AFS… it was all so overwhelming I tried to just focus on one person at a time. As the crowd dispersed and we walked out of the church I felt unfathomably blessed. And I was very happy to know that my Swedish was intelligible! 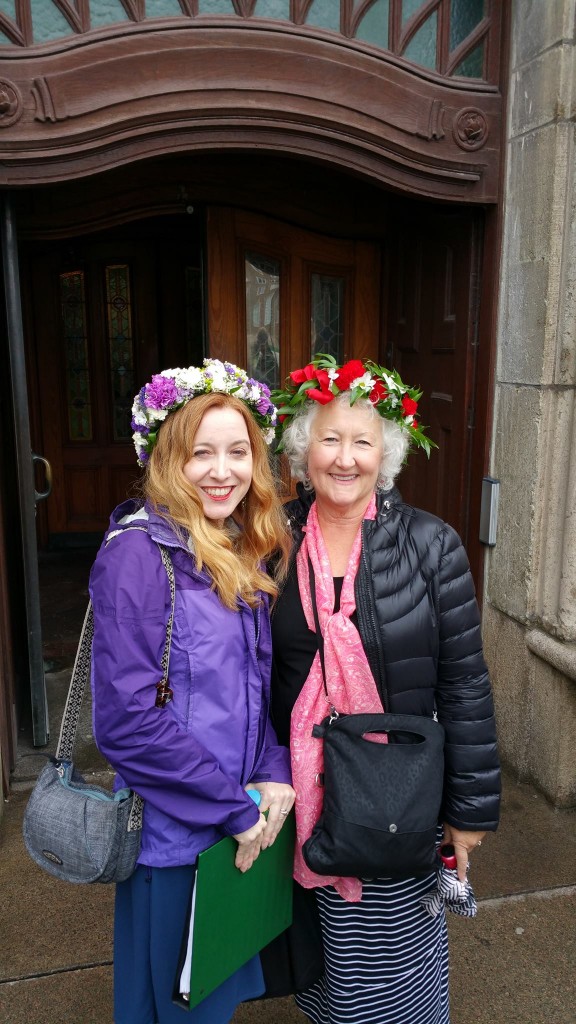 In the evening we had our first real, honest-to-goodness family reunion, thanks to Anne and Rolf who organized it all!  We had about forty relatives there, six of us from the American side and the rest were Swedish (plus a Dane or two for good measure). Our Swedish relatives are wonderfully generous and kind people, and we felt incredibly welcome. I brought my map of Sweden and asked everyone to circle the towns where they and their families lived, so I could visit as many as possible during my travels.

I love that our Swedish relatives are getting connected with each other now, too. Some of them are in branches of the family that have become rather small, so now they have found relatives they never knew they  had.  And as it turns out, some of them already knew each other and didn’t even know they were related! What a small world it is.

And at my mother’s request, I had my Allt för Sverige “winner” moment… 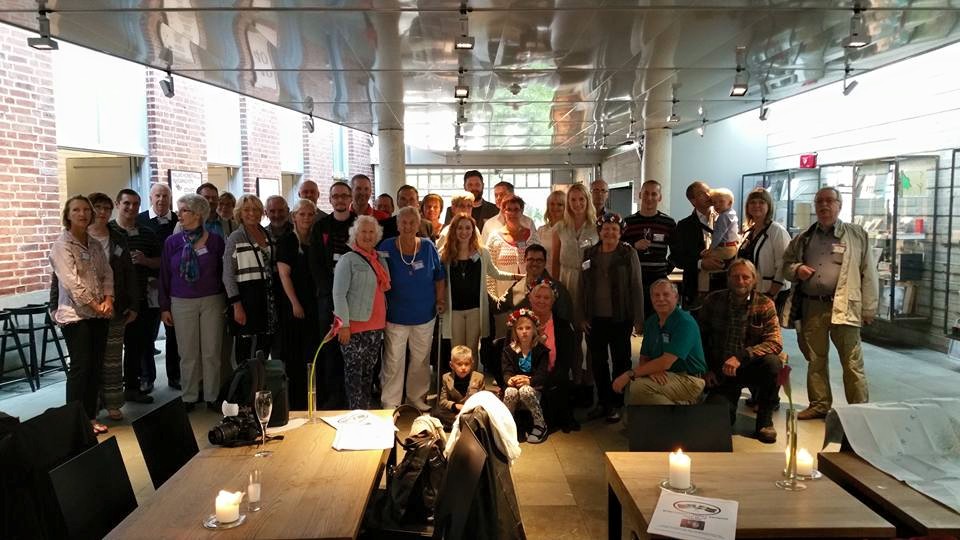 P.S.  It was a rainy summer in Sweden while I was there – everybody kept apologizing for the weather but I really loved it. I avoided the record-high temperatures back in home with drought that has led to the worst wildfires Washington state has ever seen. As I’ve been writing this, we’ve had an unseasonably strong storm come through – a storm that brought much-needed rain to our state and is finally helping the firefighters to get some control over the wildfires.

Last night as I talked with a friend about my experiences in Sweden, looking out at the rain, a song written by Randy Newman came to mind.