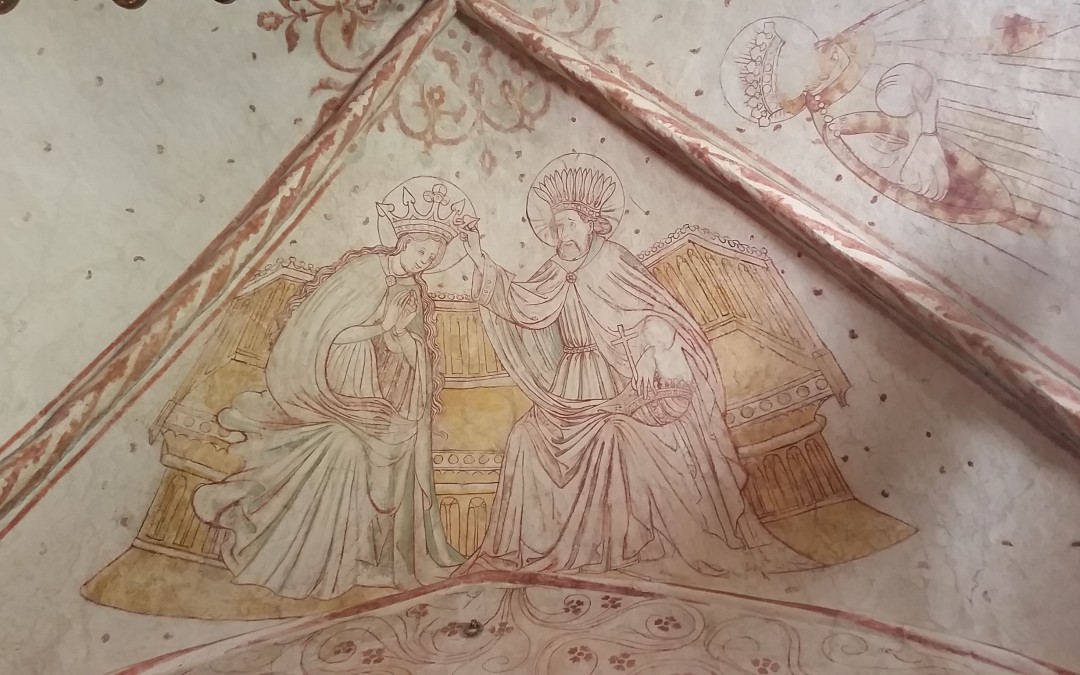 After the midsommars eve festivities, I got up early on midsommars day to travel to Eslöv, where I was invited to be the guest singer for the midsommar themed service at a small but historic church called Västra Sallerups Kyrka. This church has a long history – it was built in the late 1100s and consecrated around AD 1200. The medieval frescoes on the walls date back to the 15th and even 14th century. 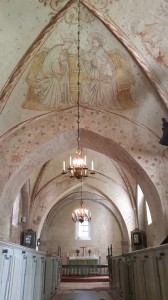 This tiny church outside a small town happens to be the home parish of my ancestors who lived in Västra Sallerup… including my great-great-great-great-great grandmother Kristina Strickersdotter, the 18th-century widow who lived to be 103 years old. Viewers of Allt för Sverige may remember that in my treasure box I received a copy of a newspaper obituary about her; it mentioned she was still able to go to church for communion when she was 100 years old.

This very place would have been that church.

The service announcement included the words, “To be held outdoors, weather permitting.”  Any swedes out there want to venture a guess what happened, given that this was Midsommar’s Day?

When I arrived there was bright sun, and a slight breeze that was a bit chilly.  We waffled back and forth on whether the service would be inside or outside until only about 15 minutes beforehand, when some darkening clouds made the decision a bit easier. 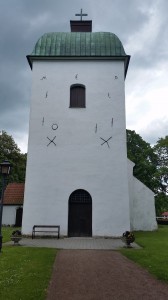 Sometimes the weather makes the decision for you.

As I waited for the service to begin, sitting out in the little side vestry, the rain began to fall in earnest.  To me, the sound of rain is one of the comforts of home.  I sat there, thinking through the music I would sing,listening to the rain on the roof echoing through the church, and it was as though I was being greeted and welcomed back home to the place where my family hadn’t set foot in four generations.

As I stood under the frescoed arch and began to sing an a capella midsommar hymn, the warmth and welcome in the room was magnified on the faces in the pews. As it was a holiday I had no expectation that there would be many people in attendance – imagine my surprise when the tiny church was filled to the brim with people who chose to spend their holiday morning in this place with us.

The acoustics of the church were fantastic and made me think that the people who designed churches back then really knew what they were doing. I studied medieval music in college, and my senior capstone project was about the way that medieval music reflected the worldview of the time – including the values and the environment in which it was created.  So for me to sing a traditional swedish hymn in this medieval space was unspeakably beautiful for me – to experience the dynamic relationship between the simple a capella tune and the space in which it was sung.  I hate the word “synergy” as it’s become a dreadfully overused corporate buzzword, but there is no better word to capture the experience.  I got to directly experience the synergy of sound and place that created something greater than both.

The final song of the service was “Hemma” from the musical Kristina från Duvemåla.  Standing there in that place, awed by so much history and the humbled by the story that had brought me there, I looked out and saw the faces staring back at me. There was not a dry eye in the room, I think. When I perform I am very good at distancing myself from the emotion of the moment so that I can control my breath and sing… but in that moment, I didn’t want to.  At the very end of the song I decided to take off my “emotional armor” and really be there, feeling that moment with everyone there.  I could hardly finish the last line:

After the service, I got a few minutes to spend alone in the church, taking it all in.  The sermon had been in Swedish so I didn’t catch everything, but I could pick out some key themes – especially “ljus” and “skapat.”  (“Light” and “created.”) I sat there looking at the sun momentarily streaming through the window and marveling at everything that had transpired to bring me there.

My family was waiting for me outside, and we walked out to the churchyard where there was a moss-covered stone.  The second-oldest gravestone in the churchyard, it belonged to relatives of mine.  Two little girls who died at a young age – they were the daughters of my morfars farmors morfar.  I’m told that to have a stone instead of a wood grave marker was very rare in this area at the time, they were more expensive than most families could afford, which is why it’s one of the few left.  My relatives were baptized, married, and buried here for hundreds of years – as far back as the church records go. 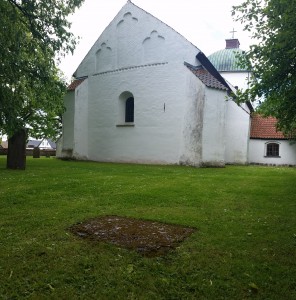 Afterward we met up with my friends Harriet and Per, who I met when I visited my ancestors’ house during filming of Allt for Sverige.  Per’s grandfather purchased the house and farm from my ancestors, and he took a group of about a dozen of my relatives (both American and English) out to see the old house.  They served us a delicious meal, coupled with some Skåne Äppelmust, and they made us feel at home. 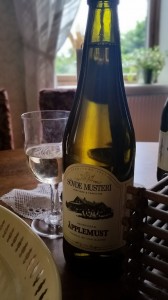 Äppelmust, just like we had in Kivik during AFS.

One of their cats inspired me with his professional-caliber napping skills. Amid all the excitement of the day, it made me realize I was ready for a break, too.  Next it was time to take a break and just enjoy being on vacation for while!